Industrial firms are relatively recent in History. They arose only after the beginning of the Industrial Revolution, in the second half of the XVIIIth century in England and, a bit later, on the Continent and in America, when a new source of energy, the steam engine of Newcomen (1663-1729), later improved by Watt (1736-1819), made it economically rational to set up factories with a large workforce located in the same place.

In the preceding centuries, "industrial" production was achieved mostly by the putting out system: merchants dispatching the production of goods, for instance textiles, in the dwellings of many people, who each had a loom in their home. Of course, there is no clear cut date for the evolution, one could mention the "manufactures" launched by Colbert in XVIIth century France, according to the mercantilist way of thinking. These factories, however, were not financed and did not function following modern capitalist techniques.

In the Middle Ages, industrial production essentially did not exist. Most of the population was rural (more than 90%) and produced goods for auto-consumption. Some craftsmen worked in towns. Society as a whole was not based on free markets, free production and free exchange.

Furthermore, the only physical products built with a manufacturing process, as opposed to agricultural products, were stones for buildings, bridges and other monuments, wooden elements for various constructions, and some metallic objects like hoes, nails, and later on the first clocks. None of those required plants for their production. Big ships were built in shipyards controlled by the prince.

In other words, industrial firms gathering in the same location large amounts of production equipment and a large workforce are recent. They are the consequence of the invention of the steam engine and other machines, themselves the consequence of protectionist laws (Calico Acts). The laws of enclosures also played a role.

Industrial firms brought big changes to the British and then other western societies. Demography and cities changed. But also the mode of payment of workers changed: craftmen of medieval and preindustrial times were paid what they produced; workers in big plants were paid their time, disregarding the quantity of things they produced. This led to tremendous changes too. From the three social classes, aristocraty, clergy and commoners, we went to workers, capitalists and landowners. The sequel of this history, which is the social and economical history of the last two centuries is fascinating, but beyond the scope of this course in general accounting.

Acceleration of change and come-back of irrational thinking

At the beginning of the XXIst century, we live in a world which changes very fast, and we take this speed for granted, but it has never been so in the past. Until the Industrial Revolution men traveled at no more than 20 to 30 miles per day, since the beginning of times. We live in the times of the computer revolution (computers, instantaneous communication, flood of information).

Each recent century had its technological marvels and the revolutions they entailed: the first steam engines, we saw, appeared in the XVIIIth century. The XIXth century improved them tremendously. This gave rise to the new science of thermodynamics. The XIXth century understood and began to use electricity and magnetism. At the end of the century appeared the first technique of wireless communication which didn't use optics. The twentieth century created many new technologies: automobiles, airplanes, telephones, computers, nuclear power, to mention but a few.

Computers profoundly changed many activities, accounting in the 60's, production control in the 70's, publishing, image processing, office work in the 80's, but also banking and financial exchanges, even the role and nature of money. It is likely that these changes will go on. Means of payment will probably undergo further tremendous evolutions too. Paypal is one example, bitcoins are another – the author does not predict them a great future, as long as they will use the so-called "blockchains" so unwieldy and unreliable, but they are forerunners of monetary inventions to come.

One characteristic feature of the new technologies introduced in the XXth century is that most were understandable by the general public, at least in their usage (a car, a phone), if not in their underlying principles (quantum mechanics for integrated circuits, nuclear energy). By contrast, those introduced in the XXIst century are less so: genetics or the latest computer science feats. A documentary movie on computers will unavoidably include sequences showing fireworks like figures of 0 and 1 on a dark blue background suggesting mysterious processes – which admittedly doesn't explain anything. In that respect, science, after having been for a century, from 1880 to 1980 approximately, a vector of public instruction, is reverting to a knowledge in the hands of the wizard Merlin.

At the same time we witness in television programmes, be they on tourism, geography or ethnography, a come back of preternatural thinking and magic. The voice-over narrates with the same objectivity the methods with which the people filmed fish or conciliate the spirits. The phenomenon can be observed in society at large: in 2016 one earns more money selling clairvoyance than knowledge.

The story of commercial firms is somewhat different. Modern commercial firms can be traced back to the merchants of northern Italian city-states which arose in the XIIth century, when they took their independence from the Holy Roman Empire. This was also the times of the advent of peace in Western Europe, after all the barbarians invasions which caused and followed the fall the Western Roman Empire, the last one being the Normans'. (The Mongols and the Turks came later, but were stopped before Vienna.) Peace is always conducive to economic activity, to commerce and to prosperity. Hence the remarkable development of Western Europe, the demographic growth, the universities, the cathedrals, the big ventures like the crusades (of such nefarious and lasting consequences), etc. which characterize the three centuries after the year 1000.

Venetian and Genoese merchants traded between the Orient and Western Europe. Large trade fairs appeared all over Europe. Some famous ones took place in Champagne, in Lyons, in England (Scarborough fair...), in Germany, in northern Italy (Plaisance), in Spain (Medina del Campo). Fairs also sprang up along the North Sea shores, in Scandinavia and Russia, in the wake of the Hanseatic league.

In the XIIIth century, Italian merchants began to devise a system of accounting more sophisticated than just keeping track of how much money is in the till. This was the beginning of double-entry accounting, which was almost full-fledged by the end of the XVth century. The first accounting manual was written by the Venetian franciscan monk and mathematician Luca Pacioli in 1494.

Those times also saw the emergence of a new means of payment: the bill of exchange, which is not money but a promise to pay later, signed by its issuer. It had great advantages over precious metals, being much lighter to carry, and impossible to steal. But of course it also had some drawbacks: it is "private money", the trustworthiness of which rests on the credit of its signatory, while precious metals (gold and silver) were accepted everywhere, and still are. 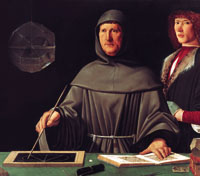 Modern banking activity appeared around the same times, when some big merchants began to lend money in parallel to their trade. Christians were forbidden by their church from receiving an interest on money they lent. This is one of the reasons why Jews often turned to banking. Also, having moved around a lot since the Diaspora, they were less concerned with material belongings and more receptive to abstractions. Despite what many Catholics think, money has little to do with material belongings, it is only a set of signs. The Jews were expelled from England in 1290, from France in the early XIVth century, and from Spain in 1492, but in fact each time they were invited back - except in Spain -, under stringent conditions, because they provided useful services.

Climax of the Middle Ages

The XIIIth century is the climax of the civilization of the Middle Ages, before the calamitous XIVth century (Plague, Hundred Years war between England and France, rebellion against the first Mongol rule in China, etc.) and the reconstruction and reorganization of the XVth century (civil wars in France, Spain, England, consolidation of monarchies, great discoveries, etc.) opening onto the Renaissance. Yet the XIVth century is also the century of the greatest abstract ideas in the West, contributed by the Nominalists (Ockham (1285-1349), Oresme (1320-1382)...), arguably more powerful than the ideas of the Renaissance.

The first modern commercial firms with a founding capital, split between stockholders, are the English East India Company, 1600, and the Dutch East India Company, 1602. (We shall understand in this course how come a capital can at the same time be brought to a firm and used up somehow, and be held and shared by the people or other entities who provided it.) In truth, in Northern Italy commercial firm trading overseas with a similar capital structure had already appeared three centuries earlier.

The first modern bank, with a capitalistic structure, is the Bank of England, incorporated on July 27, 1694, as a private joint-stock association, with a capital of £1.2 million. It lent right away its entire funds to the government of William and Mary who came to power after the second English revolution at the end of the XVIIth century (the "Glorious Revolution", which in 1688, without bloodshed, pushed out the last catholic English king, James II). In return for the loan of its capital, at 8%, it received of course receipts (the equivalent of what we today call "government bonds"), but also the right to issue notes and a monopoly on corporate banking in England.

It is around that time that William Petty, John Law and a few other people began to understand that the monetary means in circulation in a country to support its economic activity don't have to be made of precious metals, but can be only, somehow, representative proofs thereof (receipts in exchange of deposits). John Law applied his ideas in France to bail out the Regent's Treasury which was empty at the time of the death of Louis XIVth in 1715. The debate as to whether notes should be guaranteed by precious metals, and to which degree – the so-called "Bullion controversy" – began to agitate monetary circles, and is still going on.

Given that the United States have, at the beginning of 2016, a public debt of 18 000 billion dollars, that that of France, for instance, is 2000 billion euros, and that the euro is being criticised in various quarters as one of the causes of the economic difficulties of various european countries, it is to be expected that new monetary events will happen as colourful as the Tulip mania, the South Sea bubble or Assignats guaranteed by disowned Church possessions.