In order to get a feel for the operations of a firm, and all the information that is produced and which we must monitor in some organized way, let us look at the beginnings of a small manufacturer of wooden toys called Chinese snakes. 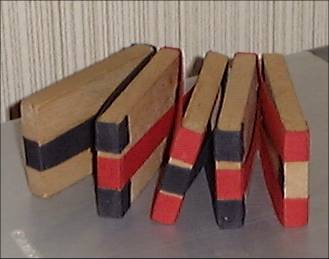 Selling to wholesalers, or retailers or directly to the public

It is a real example, just a bit simplified. I found this toy in France at a small handicraft producer in Burgundy, a guy who had decided to live in the countryside and earn his living making wooden toys that he sold mostly to wholesalers and retailers and, occasionally, to visitors to his small workshop like myself.

In "strategic" analysis, these various markets are generally viewed as different "strategic segments". A "strategic segment" is a competitive arena. If you manufacture and sell bicyles and television sets, you are active in at least two distinct segments; this is true too if you manufacture and sell bicycles and motorcycles. The "rules of the game" are not the same. The collection of trades you must master in each segment are different. Sometimes it is not rational to combine both activities in the same firm. Sometimes it is.

Therefore the same manufucturing activity serving different markets is usually viewed as consisting of different activities, at least at the commercial level.

2) Next we open a bank account and put the 50 000 € on the new bank account. We could of course put the money into our own personal bank account we already have, but it would be a bad idea because we would soon mix up personal expenditures from expenditures for the firm. And anyway it is legally mandatory.

5) We need to purchase office equipment: a table, a file cabinet and a desktop computer. This, plus some expenditures for fixtures, amounts to 3000 €.

9) The manufacturing employee begins to make toys. The salesperson sets up a selling program, and begins to call potential clients (these are called "prospects").

11) At the end of the second month, we have to pay the same expenditures plus, say, electricity and maintenance expenses in the workshop: altogether 10 000 €. We are down to 16 000 € at the bank.

12) We also make a note that we have wood wastes of 20 percent: that is 80 percent of the wood we purchase ends up in our toys and 20 percent are wastes or rejects.

13) We also note that the manufacturing employee produces 50 toys per day, about 1000 toys per month. And the salesperson visits on average two prospects per day in France.

15) Carrefour will pay us in 45 days. In the meantime we have a "bill" signed by one of Carrefour's chief purchasers (a piece of paper called an IOU; more technically, it is called a 45 day draft - in French, "une traite" or more generally "un effet de commerce") certifying that we shall get paid in a month and a half.

In the next lesson we shall first make an important recap of where the firm stands at the end of the third month, and then see the subsequent steps.